Why has Bill Etheridge resigned?

I last spoke to Bill Etheridge (pictured) when, as an active UKIP MEP, he visited Belfast earlier this year. I had left UKIP about a year previously after 10 years’ membership and felt I was unlikely to rejoin. Like Bill, I hold strong libertarian views. So how is it that as Bill now resigns from UKIP I have been back in the party for the past two months?

In his letter to Gerard Batten Bill says: “A Leader with no mandate has permanently changed the character of UKIP ………with many of the more liberal minded members leaving and being replaced by people inspired by your [Gerard Batten’s] opinions means that I now believe the party has irredeemably changed.”

As a more liberal-minded member who left in 2017, part of the reason why I was prompted to rejoin UKIP this summer was the refreshing libertarian leadership of Gerard Batten. (The other principal reason was the tireless work that had been carried out by my friends in UKIP Northern Ireland to reform the local party and readying it to be put before the electorate in the coming months.)

UKIP has once again become the party it was when I joined in 2006. Far from expressing ‘extreme nationalist views’ the party has once again taken on board the legitimate worries and concerns of the hard working people of the United Kingdom who are overlooked and scorned by the Westminster/Holyrood/ Cardiff Bay/Stormont bubble class. It is never extreme to address these concerns.

For years now the UK legacy parties, both national and regional, have let the press and media dictate where their ‘red lines’ should be drawn. Unfortunately, at the very time UKIP was rising to the pinnacle of electoral success in 2014, the rot of kowtowing to the politically correct cultural Marxism of the Main Stream Media and the political elite had spread into UKIP. The party started to draw its red lines across the path of political reform and true electoral representation while rubbing out the lines separating UKIP from the worst aspects of the legacy parties. Now that is changing radically.

We must resist calls to stand back from criticism of Islamist lawbreakers and terrorists on the grounds that we might offend law abiding members of Muslim communities. Far from offending these people we would be supporting them in going about their legitimate business away from the shadow of terrorist killers.

The non-interventionist line was followed in Northern Ireland for year after year with the political great and good urging us to win the ‘hearts and minds’ of the communities where Republican and Loyalist terrorists sheltered. The result was to hand over those communities lock, stock and barrel to the vicious rule of paramilitary thugs. In many poorer areas of Northern Ireland this situation prevails today – a brutal legacy of the Good Friday Agreement.

If this attitude spreads throughout the United Kingdom the results will be catastrophic and very dangerous.  Large areas of our cities will end up controlled by terrorist groups, and local residents will only be able to carry on with their lives by the leave and under the supervision of local gang bosses. ‘Justice’ will be administered by kangaroo courts with mutilation or worse the usual punishment for transgressions against the ruling oligarch.

UKIP, of all parties, must fight to deliver the people of all of the United Kingdom from the tyranny of multicultural terrorism. I attended the Birmingham Conference in September and my impression is that UKIP stands ready to take on that necessary battle.

Incidentally, it was great to be spending time at a UKIP Conference talking and debating with true Kippers once again.  Such a contrast to the over-orchestrated propaganda-fest that the Tories have just put on in the same building this week.  I don’t see Gerard Batten dancing onto the stage to give future UKIP Leader’s speeches – thank goodness.

I am pleased to see that very many UKIP members believe, as I do, that we must reach out and co-operate closely with others who share our views on such vital issues as Brexit, immigration control and opposing creeping cultural Marxism in all aspects of our civil society.  Now is not the time to turn away allies.

Bill Etheridge has made an enormous contribution to UKIP.  We should be grateful for that and I am sorry to see him leave. However, his reasons for leaving the Party are irrational.  UKIP is not becoming an extreme right wing party. That is the view of the Main Stream Media.

I will finish with the words of the late American Senator, Barry Goldwater: “I would remind you that extremism in the defense of liberty is no vice!  And let me remind you also that moderation in the pursuit of justice is no virtue.” 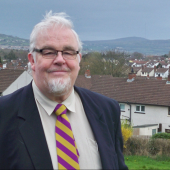 How UKIP Can and Will Win the Ethnic Minority Vote