Ladies and Gentlemen, good morning, good afternoon, good evening! For those who do not know me: my name is Phil Bottomley.  Let me ask you all this question. How many fools are there reading this?

Come on, put your hands up.

No one? Are you sure?

Not one of you ever voted Labour or Conservative or Liberal Democrat?

I ask, not to insult you but to bring home to you that that is exactly how the other three Parties perceive you. They treat and think of you as fools!

I’m talking about me, I’m talking about the person sitting next to you, your next door neighbour, your children, your siblings, your Mum your dad, your Uncles, your Aunts, everyone that you know who votes in an election.

They do it time and time again and we, like the fools they perceive us to be, let them get away with it.

The referendum on whether we stay or leave the European Union is a classic example.  For some inexplicable reason 17.4 million fools’ caps fell to the floor giving those hatless souls instant access to common sense. Lo-and-behold the government was defeated, make no mistake: this vote was heavily rigged in their favour and heads had to roll. As we saw, the first head to roll was that of the architect of the Referendum, David Cameron.

Conservative Head Office went into frenzied overdrive, this wasn’t right. Order, according to European Union diktat, had to be restored.  Voila, I give you Dithering Doris, the Queen of Remain, the fudge-makers’ floozy.

What did we do, the 17.4 million who thought that they had won? I’ll tell you, we all stood idly by and allowed the System to take us all for fools once again.

Do you feel ever so slightly foolish because you voted for these people?

My advice: stop feeling foolish, stop allowing these people to treat you as fools, instead get angry. Get angry enough to become active in your community, find out exactly what these people do on your behalf so that you can present a reasoned argument when you confront them. Not one of them, no matter from which Party, Labour, Conservative or Liberal Democrat, likes to be confronted with the truth. That old saying that “The truth hurts” really shows its true meaning when these people are confronted by it.

Most people are parochial voters which is what the three main parties rely on. They rely on people who are myopic in their political views, intolerant of change, provincial and illiberal. These are their core voters, you can hear them:

‘This town has always voted for them’,

‘It doesn’t matter who you vote for, once they get their feet under the table they’re all the same!’

Do you recognise the pattern? Fools. We are all being taken for fools.

No one likes to be thought of as a fool, I don’t and I suspect that neither do you. So how do we put a stop to it? The simple and easy answer is to stop voting for them, in fact, stop listening to them because, let’s face it, we have heard it all before and nothing ever changes.

There is a growing consensus that our present system of government, basically a two-party system, has failed and that now is the time for a new, vibrant, Right Wing Party. A Party which will rejuvenate politics and the country. I happen to believe that this Party is UKIP.  Probably the only Party in this country that can guarantee that it will honour the result of the Referendum. No transition period, no more money to Brussels, a Party which will put Great Britain and the British people first!

I know from experience that UKIP will never, ever take people for granted nor will they take those who vote for them as fools!

Corbyn and May hold you all in contempt, evidenced by their atrocious handling of Brexit and their indifference to the result of the Referendum, when the truth of the matter is, it is they who should be held in contempt by each and every one of us.

Bear this in mind when you are next at the ballot box. 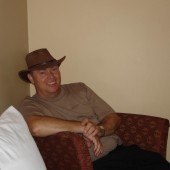