The EU: Beyond Reform 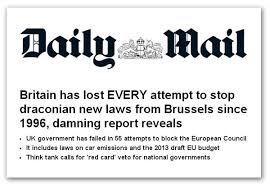 Prime Minister David Cameron’s promise that he will renegotiate the terms of our EU membership after the 2015 General Election and call an EU referendum in 2017 is clearly no more than a cynical ploy to put the issue off until after June 2015. He’s trying to appease his back-benchers and his activists. And Ed Miliband is right in this (if in nothing else): that the plan creates unnecessary uncertainty for businesses over a protracted period. For a long time Cameron prevaricated even over the demands he would make in Brussels. He’s now set out his stall, but it’s both unambitious and ambiguous.It’s an invitation for a European fudge. If he were serious, surely his starting point should be to re-instate the opt-out on the Social Chapter that Tony Blair so rashly gave away. Then he could ask for our fisheries back. But neither of these features in his list.

The plan is a non-starter for several reasons. First, few people expect Cameron to be Prime Minister after the General Election. Second, no one in Brussels, or in the Chancelleries of Europe, believes there’s any hope of achieving a revised treaty (for that’s what it would take) by 2017 – or at all. The best he’ll get is a few cosmetic tweaks. Angela Merkel recently suggested that we might be allowed a little extra flexibility on the working time directive as it applies in the NHS (did we fight two World Wars to have a German Chancellor telling us what hours our doctors could work?). And thirdly, Cameron has already broken a solemn promise to hold an EU referendum. No one believes him this time. Finally, he’s thrown away his best negotiating card by announcing in advance that he will campaign “tooth and nail” to stay in – regardless of the outcome of the negotiations.

Nevertheless, the opinion polling business has taken the PM’s plan as a basis for new polls which show – surprise, surprise – that offered the three-way choice of (A) Status Quo; (B) Staying in a “reformed” EU; or (C) Getting Out, the public go for the middle course.

But the public are being conned, because the middle course is simply not available. The European Union doesn’t do reform. It’s not an option. As I frequently say, the EU is beyond reform, and deserves to be put out of its misery. The EU institutions and apparatchiks have a finely-honed contempt for public opinion, demonstrated all too often when the simply reject the outcome of a national referendum, and have countries vote again, until they get the “right” answer. Or when they rename “The European Constitution” as “The Lisbon Treaty” – and then say that because it’s a Treaty, not a Constitution, it doesn’t need a referendum Except of course in Ireland, where yet again the voters got it wrong, and were obliged to vote again.

There will be no meaningful reform. Only more of the same. Only “ever closer union”. We either go along to that destination, or we get off the bus.

But not only is option (B), reform, a fraud and a delusion. So is Option (A), Status Quo. The EU explicitly rules out the status quo by its commitment to ever closer union. It’s not a case of accepting the EU as it is. It’s as it will be. The EU is constantly accreting new powers to the centre from the member states, either consistently with the Treaties, or (especially in terms of the current banking “reforms”) out-with the Treaties, in a ultra vires sort of way.

Cameron and Clegg would like you to believe that “passing powers to Brussels” is an occasional event always accompanied by a new Treaty. They have offered a referendum on any such new Treaty. They conveniently fail to recognise that the Lisbon Treaty allowed a self-amending process that carried forward the plan for integration without necessarily triggering a Treaty. Indeed every time we MEPs go to Strasbourg, or have a “Mini-Plenary” in Brussels, we vote through measures that have the effect of increasing the powers of the EU institutions, and reducing the powers of the member-states. (Of course UKIP MEPs vote against). We’re not talking about an event. We’re talking about an on-going process that goes on week-by-week, month by month. There is only one way to stop it, and that’s to get out. And that’s UKIP policy. You can vote for it on May 22nd.

Photo by The Freedom Association

Roger Helmer is an East Midlands MEP and UKIP's energy spokesman. His articles appear both here and on his personal blogging site by agreement.

Romanian “slaves” – why not send them back to Romania?

Bribery and Scandal in Europe – Part One