Unite The Right? Unite What “Right”?

In an updated and expanded version of his article first published at BogPaper on 23rd October, UKIP-inclined Michael St George outlines why he finds Toby Young’s Unite The Right campaign insupportable

I have a huge regard for Toby Young. I share his robust brand of classical-liberalism, consistently voiced in the face of the dominant metropolitan left-liberal orthodoxy. And my admiration for his role in promoting the Free Schools movement, liberating education from the dead hand of State mediocrity, is almost limitless.

But I believe his argument here on 30th October for ground-up, local constituency-level pacts between Conservatives and UKIP in 2015 is profoundly wrong. Not necessarily just on narrow electoral terms, mind you, but on more fundamental, conceptual, terms: because you cannot, by definition, Unite the Right when one of the two movements to be united barely qualifies that label.

A large part of Toby’s argument seems to be based on the premise that irrevocably securing the EU In-Out Referendum is most UKIP supporters’ overriding concern. Yes, that’s partially true: but crucially, that premise also understates the numerous policy differences between UKIP and the Cameroon-Conservatives in other areas which militate against such a pact being tenable for UKIP members, supporters, or even incliners. However, let’s stay with that Referendum issue for a few paragraphs.

“It’s the only way to secure a referendum on our membership of the European Union”, goes Toby’s thesis. Really? I’m extremely sceptical about that, because, as I wrote over at Backbencher in January about his Referendum Pledge, when it comes to the EU referendum issue, Cameron’s leadership has been characterised by trying at all costs to avoid conceding one. It’s glaringly obvious that it was finally wrung out of him, not from any pluralist convictions, but from fear of UKIP’s surging electoral appeal.

He tried in vain to impose a three-line whip against a mere non-binding motion for one in October 2011. His January pledge was so hedged about with qualifications that it unravelled within hours. It turned out to dependent on both –

(b) successfully negotiating a substantial repatriation of powers from the EU,

both of which are highly unlikely, to say the very least. He went on to add the caveat that he would personally front the In campaign, even if no substantive renegotiation/repatriation concessions were achieved – the clear implication being that he’s irrevocably committed to Britain’s EU membership, no matter what its costs or disadvantages. And he subsequently hinted, in an under-reported interview with El Pais in Spain, that as PM he would “probably not” honour an Out vote, even were that to be the Referendum result.

His Parliamentary measures reveal just as much sleight of hand. The so-called “referendum lock” in the European Union Act 2011 has been much trumpeted as providing for one in the event of further EU treaty change. Yet, as we have seen, whether on budgetary amendments or banking union, the EU is adept at enacting far-reaching constitutional change without forcing on member-states the inconvenience of obtaining electoral consent. The Act also mandates one, we’re assured, in the event of substantial further transfer of powers – but the assessment of just what constitutes that is left to, yes, Cabinet discretion. How very reassuring.

Finally, the Wharton Bill now going through Parliament, and to be debated next Friday. As astute observers have noted, the Bill, while it specifies the holding of a referendum before the end of 2017, it appears to contain no provisions for implementing the result of that referendum, should it be an Out vote.

I’m no anti-foreigner, isolationist, xenophobic Little Englander. I believe strongly in open markets and free trade. But I also believe passionately that the sovereign nation-state, governed exclusively by its own democratically-elected legislature, is the largest political entity where citizens can feel a common identity and sufficiently like one another to let them accept internal fiscal redistribution and abide by laws governing them all.

And I’m convinced beyond doubt that – even ignoring its collectivist and protectionist economic, fiscal and social policies – the supra-national EU, which right from its inception deliberately designed its governance structures to supplant popular consent in favour of unelected, self-appointed, unaccountable technocratic elites, is fundamentally anti-democratic, profoundly inimical to, and viscerally contemptuous of, the sovereign nation-state.

Mine is, I hope, the nuanced, thought-out nation-state patriotism so aptly described by Roger Scruton and Thierry Baudet, who claims in his book “The Significance of Borders – Why Representative Government and the Rule of Law Require Nation-States” that the Europe of nation-states is being purposely destroyed by supra-nationalism from above and by multiculturalism from below, rather than any ugly, xenophobic, aggressive strand of nationalism.

Yet Toby Young’s exhortation for a Cameroon Conservative-UKIP pact asks me, in effect, to place my trust for satisfactorily resolving the UK-EU issue in a Prime Minister who’s on record as contemptuously dismissing my views as those of a swivel-eyed, racist, lunatic, fruitcake. A Prime Minister whose own performance over conceding a popular vote on the UK’s continuing EU membership is marked more by a reluctant, grudging acquiescence than by anything else. Sorry, Toby – but I think not.

Ignore the EU issue, and look at other policy areas. Toby Young also implies that supporters of both parties believe much the same things on important issues. “There are more issues on which you and the Conservatives agree than disagree”, he says, What he’s previously called “the narcissism of small differences”. Once again – really?

Take just one of the examples which Toby cites – freedom of speech, in which “we all believe”, according to Toby. But Cameron, let’s recall, is the Prime Minister who sent the hapless Oliver Letwin un-chaperoned into midnight negotiations with leftist politicians and the leftist pressure group Hacked Off, to emerge with proposals for the first state licensing of a free press in 300 years.

The Prime Minister who, instead of rejecting such an illiberal measure out of hand, has, as recently as last Wednesday, embraced its embodiment in a Royal Charter, thereby dragging our apolitical constitutional monarchy into the arena of grubby politics. God knows what undesirable precedent that will set. There have been some fine denunciations of this potentially repressive measure. Among the very best is this one. You may notice the name of its author.

UKIP’s Nigel Farage, on the other hand, has resolutely set UKIP’s face against any degree of political intrusion or oversight on a free press whatsoever. This isn’t a minimal variation on an otherwise similar policy, but a fundamental difference of principle,.

Or take other, more economic issues, and Toby’s Young’s implied criticism of the UKIP accusation that policy differences between the three formerly main parties are negligible. Well, aren’t they? Isn’t the reality that, even with Ed Miliband’s Labour Party’s tack to the Left, there’s still far too little difference between it and the Cameroons than both like to pretend?

Both are committed to the maintenance of onerous growth and job-creation-inhibiting business regulation. And, worst of all, both are committed to slavish obeisance to the demonstrably flawed Green energy policies which, as we’re now seeing, will threaten energy sufficiency while dramatically hiking its costs. The Pale Blues, remember, trooped enthusiastically through the House of Commons division lobbies to support Red Ed’s Green taxes.

Let’s face it: the only real argument and difference between Lib-Lab-Con is about whom their commonly-accepted, homogenous, centrist-leftist state should be run by: the visceral, tribal, class-envy levellers, or the patrician, condescending, noblesse-oblige paternalists. As Douglas Carswell pointed out only this week, it’s theirs that is the real narcissism of small differences.

Yet Toby Young suggests that UKIP voters should ignore all these only cigarette-paper thin differences, and attempt – despitepsephological and acceptability barriers which are becoming more acute, self-evident, and insurmountable with every passing week – to try and return to No 10 a Prime Minister who gives every indication of preferring another coalition with the wretched LibDems to a majority administration where his despised, off-message backbenchers and grass-roots activists could not be ignored, In the words of one who truly was of the Right, Toby: No. No. No.

I don’t want the UK to have to endure the nightmare of a Labour government, or a Lib-Lab coalition, from 2015-2020 any more than Toby Young does. He’s right: it would be a disaster, and we do need a united Right to achieve it. But that can’t be achieved, certainly for me, and, I suspect for many, while the present Conservative leadership so signally fails to justify that appellation.

There is a way, though, that the laudable aim of Unite The Right can be achieved, But it means ridding, purging, the current Conservative part of the putative unified Right of the personalities and policies of the left-inclined centrists who belie the “Right” label: in other words, the Cameroon claque of metropolitan “modernisers”. And there’ll be the perfect opportunity, and excuse, in 2014.

I’m still, in Lord Ashcroft’s terminology, a strong UKIP-incliner. I have reservations, for example, about the illiberalism of some social policy, insufficient economic rigour, and the reluctance to acknowledge the need for drastic structural reform of the NHS. But on the issues of the EU, education and energy, it certainly wins the “least bad option” contest by a country mile. However, I’m also not so unrealistic as to imagine that a Parliamentary majority, or even substantial minority, is in prospect for 2015, or even 2020.

But a truly thumping victory in the 2014 Euro-elections is. That’s why I’ll not only be voting, but actively helping, my UKIP friends, with the intention of inflicting such a comprehensive thrashing on the Cameroon-Conservatives that the rest of the Party will gaze into the abyss, finally realise that sticking with the Cameroons means certain defeat in 2015, cast them adrift, and capitalise on what would then – but only then –  be a far greater coincidence of views with UKIP.

That way, Unite The Right! can be achieved practically, and maybe even permanently, not just theoretically and temporarily. If you truly want to Unite The Right, Toby – Dump Dave, and all his works. 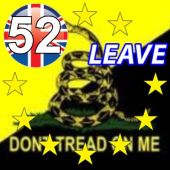